Random Stairs In The Woods Explained: Who Leaves Them? 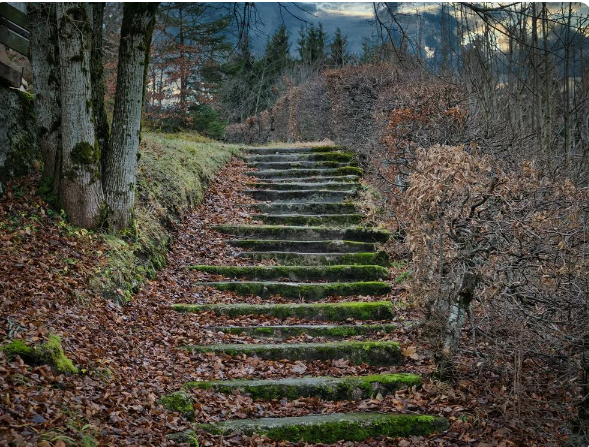 Sometimes, walking through the forest, you can suddenly see very strange buildings. For example, They can be intricate random stairs that lead… to nowhere. Such ladders are scattered throughout forests and other places, and people are puzzled as to where they came from and what it all means. Now we will tell you about several of these strange structures.

Mysterious random stairs to the void

People who have met with such a building begin to come up with the most intricate and creepy theories regarding their origin. In particular, there are legends that if you climb one of these stairs, you will find yourself in another world, and from this you will disappear forever.

Many of these staircases are located in the depths of the forest thicket, and there are no settlements or buildings nearby. They all look different: style, material, size – all this is different. Some believe that they were left from old cities, houses. However, some stairs look brand new, as if they were installed a few days ago.

Some of these buildings are associated with strange stories. For example, in the Philippines there is such a mysterious random staircase, it is also called the “staircase of lost time”. One day, a volunteer who was looking for people who were missing came across this staircase in the jungle. She aroused his interest, and he decided to climb it. Climbing up, he found no one there, except for an angry dog, which forced him to climb even higher.

The man returned home without finding anything of interest. But he was surprised to find that he was fired from his job, and his wife was married to another man. What happened? He was perplexed. Later it became known that he himself was declared missing, because five years had passed since he climbed the random stairs.

The Pyramid of Bomarzo is made of solid stone, and its stairs lead up to a small platform. Dated around the seventh century BC. Researchers think that this random staircase led to the altar, where sacrifices and various rituals were made. However, no one, of course, knows exactly what happened there and what this staircase really is for.

Staircase to the castle

But random stairs are not always associated with some kind of mysticism. For example, in the United States there is Madame Sherry’s staircase. This is one of the few stairs whose history is known. So, the star of the music hall of the twenties of the last century, Antoinette Sherry, built a whole castle for her summer vacation. A very beautiful staircase led up to it.

But the years went by, and one day Sherry lost her fortune. There was no more money to maintain the castle, and later it burned down, leaving behind a beautiful Roman-style staircase.

Random staircases are a real cultural symbol. They are found in the mythology of many peoples, and our ancestors attached great importance to them. It is a symbol of the connection between the worlds, heaven and earth, heaven and hell. It is opposite and vertical. It is no coincidence that many buildings of antiquity were made in the form of random stairs. Recall at least the various pyramids of ancient civilizations.

Ancient civilizations generally attached a lot of importance to symbolism. And sometimes it was associated with very specific knowledge. For example, the most ancient tribes and kingdoms already had knowledge about space, which was officially recorded only in the nineteenth century.

The Ultimate Guide To Dental X-Rays