Common Types of Coding Languages To Learn In 2022 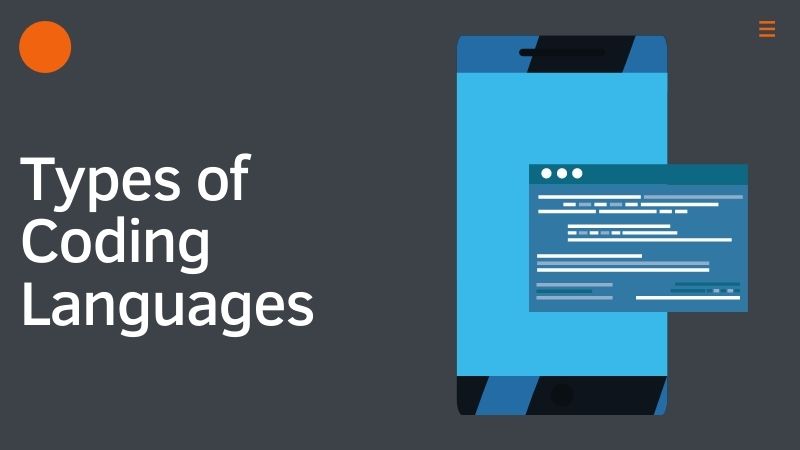 Language is important since it is the primary means of communication between each other. What about devices like the computer? How will individuals be able to control the computer? Then there’s code or different types of coding languages.

Developers use coding languages to effectively design and create solid programs and solutions. These are like web apps, mobile apps, and even games. Every software is written in coding and programming languages. These languages are one-of-a-kind and can be changed to match a certain operating system, platform, and programming style.

Computer language is diverse, much like human languages. Computers utilise syntax and semantics instead of vocabulary and alphabets.

So, what are the types of coding languages that you can also learn to make apps, games, and more? Let’s find out!

What are the different types of coding languages to prefer in 2022?

You’ll probably have your mind roasted if you wish to learn coding languages. You won’t be able to examine all of them since there are far too many. The best strategy is to learn each language and how to utilize it.

But check out the top 5 types of coding languages of 2022:

This is the object-oriented programming language. This coding method is useful for creating video games, software, and a variety of other products.

C++ may use to create Windows and Linux software, as well as video games and mobile apps. It is extremely portable and can be used on a variety of devices. Unlike Objective-C, C++ supports by Windows Phone, Apple Android, and Blackberry, so it’s not just for iOS.

Other types of coding languages. Python is an object-oriented programming language with extensive features. Employees in the fields of information technology, professional services, engineering, and design frequently utilize this popular coding language.

Python is a programming language that almost everyone, including novices, is familiar with. It is popular among developers because it is simple to learn. Furthermore, its adaptability is readily apparent. Python works well in microframeworks, frameworks, and advanced content management systems for online and internet development. This powerful language also suits scientific and numerical computations.

Objective-C is an object-oriented programming language based on the C computer language. It is one of the most basic types of coding languages. This is the coding language used by Apple engineers. Its primary purpose is to create mobile apps for iOS and OS X. Though it is regarded as the best language for iOS programming, it is only available for that platform. It is unable to create applications for other platforms, such as Android.

This programming language is popular among programmers, especially beginners. JavaScript is the only language that all web browsers support. As a result, it is suitable for front-end website creation as well as game development.

You may construct a website using JavaScript that can collect and check username availability immediately after the user enters the information. It also eliminates the need to reload the page. It can also add an autocomplete feature to a website, correct layout flaws, and improve HTML text fields so that visitors may choose from a variety of presets.

This language is one of the most often used types of coding languages for producing database-friendly web pages. Web application development, command-line scripting, and server-side scripting are all possible with this popular programming language.

PHP programmers can create dynamic website content, gather form input, and send and receive cookies, among other things. On the server, PHP may also create, read, open, write, and shut files. There’s more, though. This capable programming language has the ability to prevent people from accessing certain pages on your website.

Do all types of coding languages work on each platform?

Ask yourself, “Which platform must I run my application on?” before committing to a certain language. This is not a question you should dismiss. You can’t choose a programming language without first deciding on a platform.

Keep in mind that each of these languages works best on its own platform. You should consider whether you want to focus on Apple or Android products while developing your app.

For Apple products, Object-C may be the best application; for Android, Java and C++ may be considered. JavaScript and PHP are the most commonly useful coding languages when creating a responsive website.

Let’s wrap it up!

In order to create an application or program, you’ll need to know how to code. It’s a language that allows you to provide technological instructions in a way that the computer can understand. Which of the types of coding languages available on the internet is most suitable for your platform?

You must first determine your platform and become familiar with the various programming languages before deciding on the best coding language to learn or utilize. You’ll need a qualified developer now that you’ve decided on a specific language.

It’s possible that you’ll have trouble finding the right developer at the right price. Some are inexpensive but lack skill, while others are really skilled but will take a hit. So, contact the experts who have effective knowledge of the languages. And also who can guide you in the best possible way. Hope you are able to get what you are looking for.