Basic Electronic Components You Need to Know of 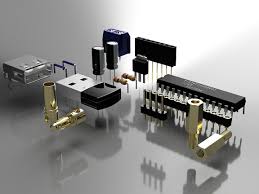 The very first component you should be aware of is the resistor. It’s easy enough to assume that a resistor, as the name suggests, will oppose the electricity flowing through it. Any situation in which the flow of current needs to be controlled to a desired level will require a resistor. Resistors are classified based on the following specifications such as power rating, type of material used, and resistance value. These resistor types are used for a variety of applications.

This type of resistor is used in electronic circuits to set the correct position. In static resistors, the value of the resistance is determined during the electronics design phase of the circuit, based on which there is no need to adjust the circuit.

These components can store electrical charges temporarily. Components come in different varieties, with the most common being electrolytic and ceramic discs. A component’s capacitance is typically measured in microfarads (F). These capacitors are of different types such as film, ceramic, electrolytic, and variable capacitors. Its value is determined using number and color-coding methods, and it is also possible to use an LCR meter to determine its value.

Through diodes, current can only flow in one direction. Each diode has two terminals referred to as the anode and cathode. When the anode is charged to a positive voltage and the cathode to a negative voltage, an electric current can flow. Reversing these voltages will not cause the current to flow. There are different types of PN diode, Zener diode, LED, Photodiode, etc.

Resistors, capacitors, and LEDs are simple items in electrical circuits. Now, let’s talk about the complex component first – the transistor. Transistors are used to make complex electrical systems such as amplifiers. An easy way to understand transistors is to think of switches. The default switch has on and off settings. Switch positions have been manually changed to control them. Transistors are more complex versions with multiple output states. Unlike switches, these conditions cannot be changed manually. The only way to change the transistor between states is to drive it. By controlling the current flowing through the transistor, the output state can be controlled to achieve the desired effect.

Inductors are just as complex as transistors. Like transistors, inductors are used in complex electronics product development. Inductors, on the other hand. Are essentially coils of wire wound around other components, as opposed to transistors.These are used as filters. Inductors are the electrical components described on this page that are most likely to be used in basic circuit designs. Even so, depending on the particular project you’re working on, inductors may only make an appearance in the design of circuits.

Integrated circuits are electrical components that merge or integrate multiple electrical components, such as those mentioned previously. One IC can act as a transistor while another IC can act as a resistor. An integrated circuit (IC) is a ready-made chip that can be used to complete a project. Mostly used ICs in electronic circuits are Op-amps, timers, comparators, switch ICs, and so on.